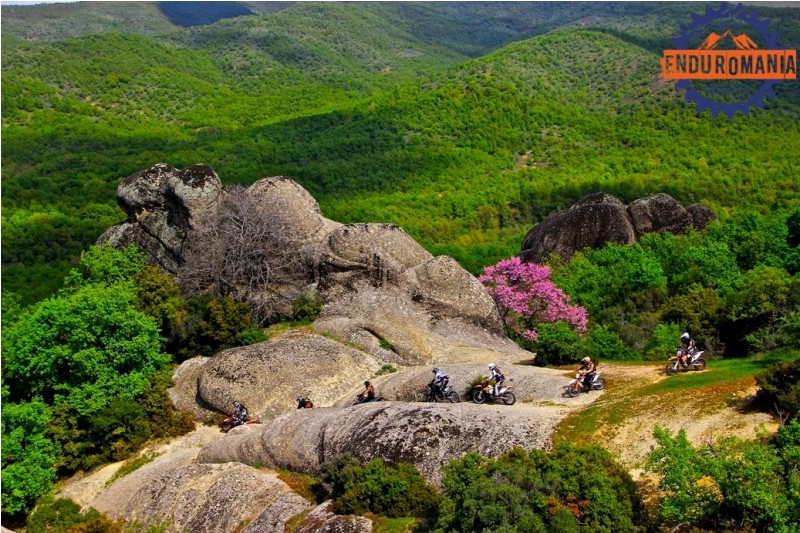 One of them is Enduromania, a 2-day event that is held every year (during September) on the high mountains of Pindos, at the village of Kastania (located 30klm North-East from city of Kalambaka at an altitude of 1000m).
This event started up 10 years ago as an Enduro Adventure organized for friends only, on the Mountain Pindos high altitude Enduro tracks and paths. Due to the authentic hard Enduro characteristics it had, it grew up quickly and consistently year by year and during September 2013 participation reached the outstanding number of 500 riders, including mainly Greek as well as few European ones. Each single day the track used (mainly paths) is completely different, and the length is usually around 100 km (totally 200 km for both days), with Pro and Hobby track choices depending on the level of each rider. The more skilled ones were following the Pro passes while the less competitive ones were choosing the Hobby. At the moment it is not a race however we have thoughts of transforming it to a race in the future.

Also, the attendance of foreign riders like the 6-time World Champion Gio Sala, the participation of WEC Professional team of InaTVRacing (voted as the top WEC Team for 2013), and various Greek Based dealers of ΚΤΜ, Husaberg, GASGAS, Beta Racing, Husqvarna, Honda etc., gave a great boost to our event.

This year Enduromania will be held during 10 and 11th September and we expect also a further expansion in terms of participation and sponsors. For this reason we want to attract more European riders who could combine this Enduro event, maybe, with their preplanned Greek holidays.

Our main aim is to expand this event and in near future, reach the World Class level of Extreme Enduro. We believe that we can organize a race of high standards for top riders and teams in one of the world’s best enduro area with huge network of virgin paths for all levels of skill.

This year, we will have live coverage from www.enduro.live people that will join our event. Also test ride of new KTM and Husqvarna 2017 bikes will be offered by Southeast Europe KTM official dealer.