Saint Paraskevi is a settlement of the municipality of Kalambaka, 12 kilometers south of the city, on the mountain side of Koziakas, with a beautiful view of the Thessalian plain and the Holy Meteora. About 100 people live there engaged mainly with cattle farming and agriculture. 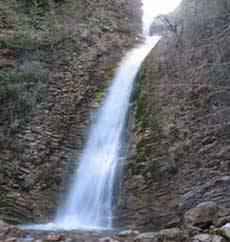 Waterfalls welcome the visitor to the settlement, at the area called “Kodena”, where you also find the church of St. Nicholas. On the eastern side of St. Paraskevi flows the river of Pineios which seperates it from the village Sarakina, while the western side rise up to the peak of Solinari. Both settlements communicate with the arched bridge of Sarakina (80m. before the arched bridge you find a newly constructed bridge).

Find the waterfall on the map

2.5 kilometers north of the settlement, at the edge of ”Sterna” of Koziakas, you can find the remains of an ancient fortress known as ”Kastro” (castle) with a elevation of 450m., which was probably used as a outpost for the narrow passing of the right riverbank of the Pineios, as well as all the northern side of Kalambaka. From the outpost you can see on the northern side all the valley of the Ion river up until the border of Macedonia, as well as the mountains of Hasia on the east.

Read more here
At the settlement of St. Paraskevi, there are saved four old churches: the Transfiguration of Jesus Christ (dated before 1712), which was once a monastery with beautiful icon paintings. Also the chapels: Saint Paraskevi and Saint Nicholas dating before the 1900. The church of St. Nicholas (dated before 1766), which also has lovely icon paintings.
Walking through the forest, you reach ”Kria Vrisi”, one of the water sources used by the settlement (the other being ”Kanalaki” and ”Kamara”). Two stone fountains ”Agia Sotira” and ”Mihos” give rest to visitors. The area has been transformed into a beautiful resting area especially for visitors (public park). There are chairs and tables, children playing areas, areas for sport (basket etc.) and a 35m. cable car for children. 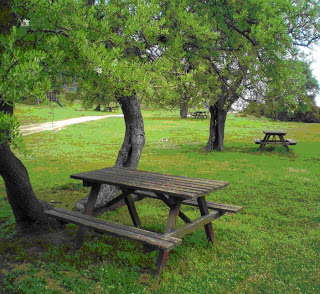 Public Park of St. Paraskevi at the area ”Agia Sotira”

The settlement of Saint Paraskevi celebrates on the name day of St. Paraskevi, 26 July. Big celebrations take place with traditional greek music and dancing. Also on the named day of St. Konstantinos and Eleni (21 May) the village again celebrates with food [fasolada (bean soup) and fish], traditional greek music and dancing. This celebration takes place outside of the chapel of St. Nicholas.
The night before May the 1st, the celebrations ”kleidona” or ”konoimole” take place. Women wear kleidona (belts with claps) around their waists and carry ”gioumia” (water containers), decorated with roses, and go to the fountains and sing traditional greek songs. At some point everyone comes together at the main square of the village, where they all sing and dance together. The men drink the water from their wife to be.
SHOW ON MAP

Don’t miss out on

Foods cooked in the special village way, pies, village bread baked in traditional ovens and also in the fantastic traditional restaurants, which will make happy even those most difficult to please.