There is no inscription in the two surviving churches (that of Prophet Elias and the Transfiguration of the Saviour). In another inscription, three priest-monks are mentioned (Damianos, Ilarion and Cyprianos), as well as the monks Ieremias and Afxentios, who pay the cost for a Holy Relics case on 30th August 1852. In remembrance of 24-8-1900 Ilarion is mentioned as the abbot who is also regarded as a benefactor of Chaliki because he built the Primary School of the village.

In April 1855, Damianos offered a metal chandelier to the church of Agios Georgios at Chaliki In a codex kept in the monastery of Varlaam, the monks Damianos and Amvrosios are mentioned. The French traveller Leon Heuzey who visited the monastery on 19-20 July 1858 calls it “petit” and writes: “The good abbot and his few monks are brothers and cousins”. The priest Christos Barbalis from Chaliki says that the Monastery was built in the middle of the 19th century by three brothers, Damianos, Ilarionas and Afxentios Mavrogeorgos, shepherds from Chaliki. Soon, more of their compatriots took the monastic vows like Cyprianos, Ieremias and Nicodemos. Ilarion travelled to Europe for the financial support of the monastery, a trip which bore fruit, and left a great will (in Athens, 6-3-1871). Afxentios founded later the Monastery of Agios Athanasios in Megas Lofos, in Old Goudouvasda of Kalambaka. Also, the monastery of Chaliki had a glebe in Markotades of the neighbouring Callirroi.

With the RA of 8th July 1886 the monastery of Prophet Elias, found in the municipality of Lakmon, county of Kalambaka and Bishopric of Stagoi, is unit-ed with the monastery of the Exaltation of the Holy Cross in Doliana, found in the municipality of Chalkis near the river Aspropotamos and it is there-after considered its glebe along with the property dependent on it”.

Today the monastery is aban-doned, but both its churches are still in good condition.

The church of Prophet Elias is a very small, one-aisled, dome-covered, stone basilica, which in the east ends up in a semi-circular niche. According to Al. Chatzigakis, it must have already been built in 1750.

The newer church of the Transfiguration of the Saviour was built in 1783. It was rebuilt in around 1868 and restored in 1963. It is a beautiful, slate-roofed, one-aisled basilica, with a cruciform roof , a cupola and two athonite type choruses. To the east, it ends up in a seven-sided niche and its ceiling is a semi-cylindrical arch. The floor is slated. 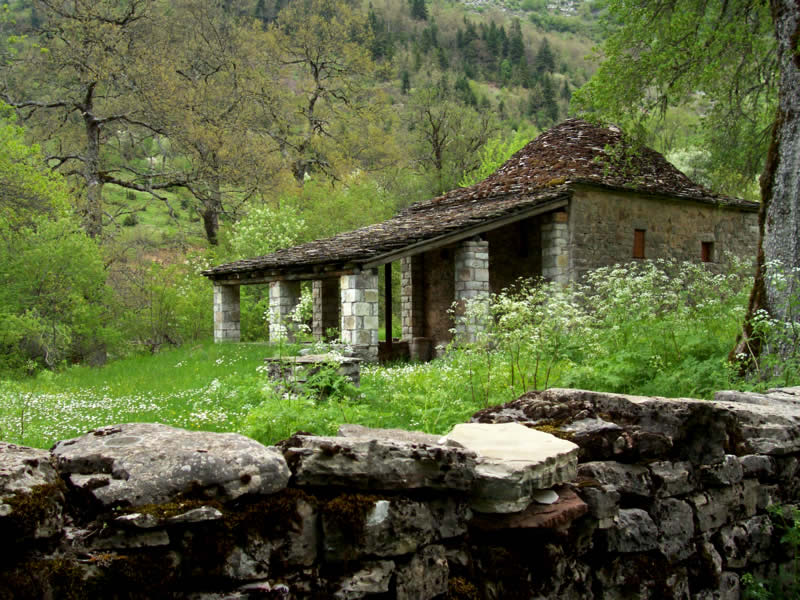 SHOW ON MAP
powered by: