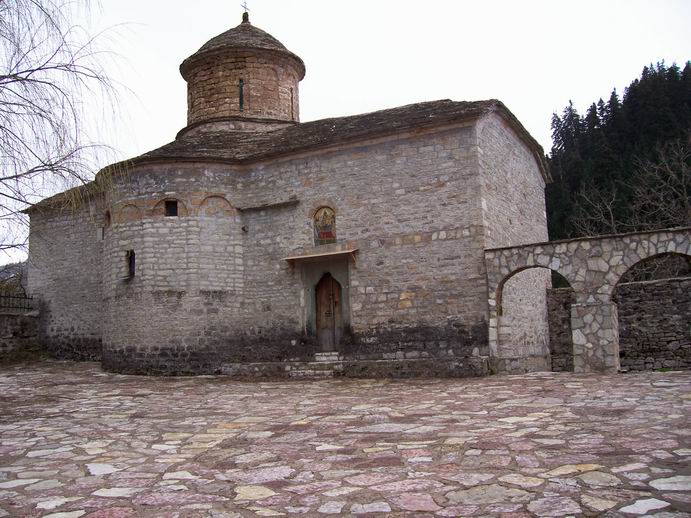 Holy Monastery of Theotokos at Anthousa

The Catholicon of the monastery was founded on 30-5-1799 and was completed on 25 August of the same year, that is, in three months. The founder was the priest-monk lakovos who is also mentioned as the abbot in 1810 and 1829.

The monastery was destroyed in 1943 by the Germans. It was then that the icon of Panagia Galaktotrophousa (Breastfeeding Virgin Mary) was destroyed, an icon which was dedicated in 1788 by Demetrios Tourrouris from Kalarrytes ” to his memory and that of his brothers’ and their heirs’ “. In the same year the chapel of John the Forerurmer, which celebrated on 29 August (the day of his Beheading) was destroyed.

Today, apart from two more recent buildings in the west of the monastery, only the Catholicon survives. It is an elegant stone building with a four-sloped roof, covered with slates, two athonite type choruses and a cupola It is a one-aisled basilica with a semi-cylindrical arch on the ceiling. There are only samples of the old wall-painting surviving. In the north door frame (where the inscriptions are found) there are elaborate carved decorations (the Trinity, the Annunciation, two-headed eagles, angelic figures and vases). In the eastern niche there are depictions of Virgin Mary, Jesus Christ and plant and animal decorations.

The monastery is built at an excellent location, surrounded by a lush fir forest. About half a kilometre away from the River Acheloos, there is an elegant stone bridge which made the communication between Thessaly and 1pirus possible through the passage of Baros.

SHOW ON MAP
powered by: