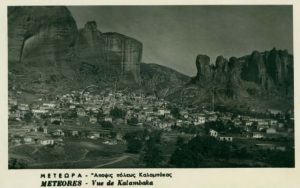 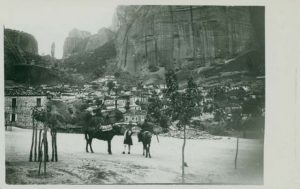 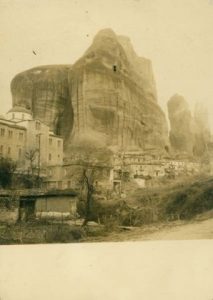 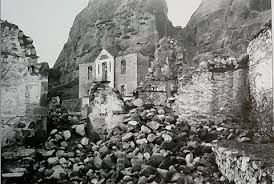 A look at the history of kalambaka

In 1995 an ancient grave was discovered at Kalambaka dating from about 2000 years before Christ. On the wall of one of the oldest churches in Kalambaka, of St John the Baptist, exists an insription that affirms the existence of an ancient settlement in this area called Aiginion.

The city was built in the same place where this ancient settlement existed. Ten centuries after Christ it was named Stagoi, with a byzantine fortress and episcopate. From this time remains only the church of the Assumption of the Virgin Mary built at the end of the 11th century, over the remains of an even older ancient Greek church maybe dedicated to the God Apollona.

Six to seven centuries ago it was named “Kalambaka’’, a turkish word meaning ‘’strong fortress’’.

A tourist from Sweden I. Biernstol (1779) notes that at Stagoi existed 10 orthodox churches and no mosque. Also outside of the metropolis existed ancient and more recent inscriptions. During the Turkish occupation there existed also a significant business centre. The area specialized in cotton and high quality silk production.

The army of Kalambaka had close relationships with those of Xasia and Pindos, many times fighting against the Turkish-Albanian forces mainly during the end of the 18th century to the beginning of the 19th century. In the Thessalian rebellion of 1854, played an important role Christodoulos Hatzipetros and Petropoulakis. The 1st-10th of May a great battle took place in which about 500 turks were killed. The city was absolutely freed on the 27th of August 1881.

Unfortunately the city was completely burned by the Germans on the 18th of October 1943. Most important to note is that during the German occupation the Greek resistance had control of the city.